We’ve been moving steadily forward on the next Six Ages game, “Lights Going Out.” It’s in the production stage, and we’re busy creating scenes and art, extending the game design, and coding.

The concept art process let me make a document to guide our artists, and we currently have 7 pieces of scene art complete. (Others are in progress.) 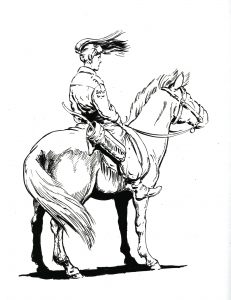 And with six new portraits, you can almost assemble an entire clan council from new characters!

Other bits of game design are moving forwards as well, such as new ventures and magic. And there’s a new map.

Since this is the second game in the series, there’s a lot that doesn’t have to be created. Although not enough is really working that you can play the game, you can at least run through a game year.

The automated testing has a few rough edges (since some of the unit tests assumed scenes from “Ride Like the Wind”), but it’s been useful catching problems in the game so far. And the game is far enough along that QA can start exhaustive scene testing.

Speaking of bugs, working on the second game accidentally pointed out a problem with the first one. (The fix, enabling many more random rumors, ended up in version 1.0.7.)

Speaking of second game, the mechanics of loading a completed game and continuing are in and working. We’re taking note of various decisions and accomplishments that your clan can carry forward (though you’ll also be able to play without ever having played “Ride Like the Wind”).

I think the biggest advantage of working on a sequel is that scenes can be up and running almost as soon as they’re written, so we can see how they work while they’re still fresh in our minds. There’s a lot less that you have to take on faith will work.

It’s a very different game so even though we know scenes run, we won’t know how they all fit together for some time. But I’m encouraged so far.

P.S. This work is not impacting the schedule to bring “Ride Like the Wind” to more platforms, and we hope to have an update on that soon.

P.P.S. It does mean that fixing bugs in “Ride Like the Wind” has a lower priority, though that’s still happening.