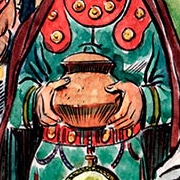 Right now, the game is undergoing internal testing while being finished. Most of the bugs are easy to deal with: fix a typo, clarify something that’s unclear, fix a logic error, or make sure advice and recommendation match.

One that came in today had to deal with being unable to proceed after having decided to give gifts, when your clan had no goods to give. The specific script was

Normally players who have no wealth wouldn’t be choosing to gift, and it wouldn’t be a problem. But of course part of QA’s job is to test the boundaries.

It would be easy enough to fix this scene, but this has the potential to be a wider problem. ChooseGoods is used fairly often. Any of those situations had the potential of failing, too. One answer to that is to do a code sweep, searching for all occurrences, and making sure they are conditioned. But that’s a manual step, which means it can be prone to error (especially if there are lots of places).

Another is to have the computer do this. We already have a unit test that exhaustively runs scenes. So I set goods to 0 in this test, and found six other problem scenes.

So human QA gives the best results, but automation can give decent testing over the entire game, and it’s easier to set up certain conditions (usually a clan doesn’t stay at 0 goods long, since crafters and traders are continually making more).