It’s been a while since we hit feature complete. That shifted game development into a different phase: making everything work. This is both a matter of finding and fixing bugs, and balancing and tuning the economic game and the overall story to make sure things are fun. There’s usually not a lot of interesting things to say, which is partly why there hasn’t been a development blog post in a while. We found bugs, we fixed bugs. Day after day.

We did notice that two of the story themes could intertwine a bit more, so Robin Laws wrote two scenes to deal with that, and another three that deal with individual leaders. Those are now coded.

We invited a small number of outside playtesters to give their feedback, and have been trying to improve and clarify things based on that.

It’s possible to win the game without encountering bugs: one playtester said, “I’m embarrassed to report I haven’t found an obvious bug yet. Did complete a play in easy.” But there still are a lot of issues we need to fix. They may show up only when you get two scenes in a particular order, or have a specific combination of advisors, or choose a play style. Any one player won’t see them, but they need to be fixed. It’s hard to know how many of these there are. And analyzing them can be tricky. Did someone run out of cows because the game is broken, or because they made poor decisions, or because the user interface let them trade away more than they intended?

Between QA and playtesters, we’re still finding enough issues that I don’t think the game is high enough quality to ship in the near future. And a few areas aren’t completely tested (such as making sure every achievement can actually be earned). 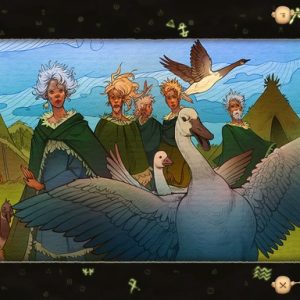 There’s another complication to figuring out a ship date: we’re moving. After five years in Philadelphia, A Sharp will be returning to the Pacific Northwest next month. (We’re heading to Tacoma, mostly for family reasons.) Coordinating this and physically moving across the United States is going to take a fair amount of time.

Without a reliable completion date, and with relocation thrown in, it doesn’t make sense to try to release the game this year. (“This year” would realistically mean “before the Christmas holidays,” so there are only 2 months left anyway.)

So we are moving our guess at a release date to 2018. We want to make sure the game is done right, and we want to have some lead time to start marketing.

I’m disappointed that we aren’t done yet, but I think the project is in good shape. As a complex bit of software that’s in alpha, the number of bugs feels reasonable. And one playtester wrote, “I have been spending waaaaay too much time playing this game. I am every bit as addicted to it as I was to KoDP the first time it was released, and I thought I was over that kind of behavior.”

18 thoughts on “Where We’re Going”