Back in May, I wrote

This was indeed easy to add, and it was in fact handled mostly with script tags. 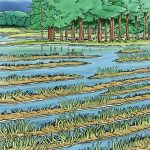 The basic idea behind these tags is that we want to avoid death spirals. If you lose a lot of cattle due to disease, the game won’t feel as fun if you then have a large herd mysteriously disappear. You’ll end up in a hole you won’t be able to dig out of. The occasional flood is fine, but if it happens when you are short of food, it’s just kicking you when you’re down.

Of course, mysterious disappearances and floods need to occur, so they can happen more often when you are able to recover. (This may still set back your plans for cattle trading or gifting, of course.)

One issue with implementing this adaptive difficulty is figuring out what constitutes a bad or good situation. The game takes a number of factors into account (herds, wealth, military, and even issues like curses or magical bounties). And scenes have to be tagged. Some were designed to be helpful or harmful, but many are more of a grey area.

It’s worth noting that we don’t actually force or prevent anything, just alter the odds for picking scenes randomly. You can think of this process loosely as “pick a card, any card” each season, where cards are returned to the deck after several years pass. If times are bad, we essentially put multiple copies of the favorable scenes into the deck, and replace and reshuffle if a disaster is pulled.

As in King of Dragon Pass, we also do something similar for the yearly omens. Maybe an ancient economy experiences crop failure about once very seven harvests, but two in a row seems like a bit much to hit the player with. The goal is to give them challenges, not an accurate simulation of widespread famine.

I added this feature only recently. It required going through all the scenes and determining which would be reasonable to use to help the player, or to make less common in bad times, and adding the right tag. The determination of good and bad times was already used to give advice, and needed only a little tweaking for the new use.

Since this is only just in the game, it hasn’t been tuned. So I’m also tracking the values in the metrics we capture.

Hopefully all this will keep the game challenging but not too frustrating.

12 thoughts on “No Kicking While Down”