Several King of Dragon Pass players requested a way to see what their Sacred Time allocations of clan magic were. In most cases, advisors will remind you on the relevant screen (especially in version 2, which added a lot of advice to the management screens). For example, in the Magic screen, if you put points into Quest magic, someone will have the advice “We prepared for a quest during Sacred Time. Our chance of success is good” (assuming it’s not trumped by some other circumstances). 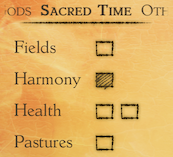 When I began Six Ages, I wanted to have a centralized place to see everything. Until recently, it didn’t seem like it would fit. Then Robin Laws suggested showing some other information, and I realized that the Sacred Time allocations could be added as well. (The slider lets you choose to see the gods, or the new other information.)